When we talk about decayed baby teeth, bottle cavities evolve much faster and a small dot on the tooth can turn into a deep caries. And from here no more than a step to the loss of the tooth. But why get to the extraction when we can find out? Find out in this article about the causes, symptoms, prevention and treatment of bottle caries.

The enamel layer that covers the baby's tooth is very thin. When caries passes through the enamel, it enters the dentin (the layer under the enamel), then immediately reaches the nerve, where it causes pain. Also, what is apparently just a small black spot on the surface of the tooth, in fact can be a very deep caries that has not yet undermined the enamel and develops in depth.

Caries can also occur in areas that are visually inaccessible, such as in very narrow spaces between the teeth.
​
Bottle caries affects the upper front teeth, first the upper molars, then the lower, the lower canines. The lower incisors often remain unaffected. It is called "bottle caries" because it develops in children who drink milk / sweetened tea / fruit juices from bottles just before bed and are not brushed afterwards. The baby falls asleep and the liquid in the bottle is spread in the oral cavity and is an excellent culture medium for acidogenic microorganisms.

Caries most often begins in the upper part, near the gums and looks like a white-yellow pigmentation of the enamel. Subsequently, it extends circularly on all surfaces of the tooth. It often develops asymptomatically and because of this the parents with the child do not go to the dentist or they appear too late when the child is already complaining of pain. Caries evolves very quickly, the crown of the affected tooth almost disappears and the tooth acquires a "cut" appearance. 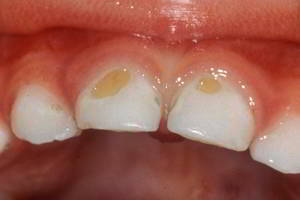 At first there are yellowish white spots on the baby teeth 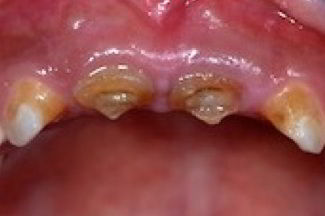 The evolution of cavities and the appearance of "cut" teeth

At the baby teeth the symptoms are very objective and the information received is given by the child. Often children cannot provide definite information about the pain caused by caries. Usually children have a sensitivity to the consumption of cold liquids and sweets. Refusal to eat can often occur in the presence of multiple cavities.

The treatment is of two types: preventive - consisting in educating the parents and curative - performed by the dentist and adapted to the existing clinical situation. Below we present the treatment stages corresponding to the caries stage.

In the early stage of caries, the dentist can remineralize tooth enamel by applying a low concentration and amount of fluoride. As soon as you notice a small yellow spot, go to the clinic. Otherwise the caries will evolve and the filling will be necessary.

When bottle caries has evolved, simply reminalizing the enamel is no longer enough. Thus, the doctor has no choice but to perform the physiognomic filling of the composite, ie to clean and fill the tooth.

Even though they are milk, children's teeth have roots and nerves, just like permanent teeth. If you see a dentist when the bottle caries has reached a very advanced stage, it is very possible that he is ready to compromise the nerve and the root. To stop the evolution, the doctor will resort to obturation and canal treatment.

When the baby tooth can no longer be treated and saved by the above methods, the only solution remains extraction. You could say that "the tooth is milk anyway!" but unfortunately premature extraction or fall has negative consequences in the development of arches and even in the eruption and structure of permanent teeth. If, however, this point has been reached, go to the clinic as soon as possible so as not to complicate matters further.

How do we prevent bottle caries?

In order to reduce the risk of occurrence, parents must be aware of the favorable factors that trigger and amplify bottle caries. It is also good to know that this type of caries has a galloping evolution, the baby's teeth can be compromised very quickly.

Here are the prevention recommendations that any parent would be advised to follow: 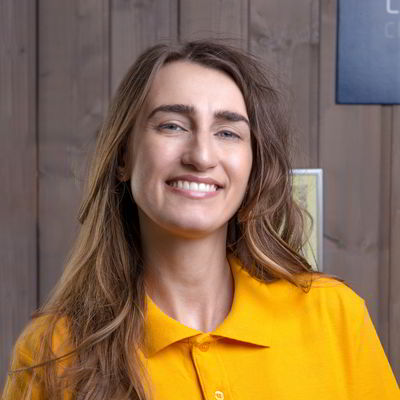 previousDental veneers without grinding (no prep)

nextCG patient 49 years old, One by One implants in one day

Do you want to schedule a consultation, follow a dental treatment or do you want to greet us? Whatever the reason, we'd love to talk to you.

Do you want to be friends? Find us on social media!

Open chat
1
Powered by
Hi! 🖐
Got a question for Dr. Nassar?
Start the conversation now!